The following images were taken by Ted Krawiec. Click on any image to expand it to it’s full size.

It was one of those perfect Summer days when the temperature was perfection, there was a slight cool breeze, wonderful country smells in the air, and not a drop of humidity anywhere. Mr. Flath (our History teacher) had invited our class to spend an enchanting day with him on his country farm.

The Flath farm is located along the twisty portion of Route 322 between Cranberry and Clarion, PA. It consists of large fields, a beautiful old farm house and one of the most amazing barns you would ever want to see. The barn was built just after the Civil War and contains hundreds if not thousands of old American antiques and collectibles that Mr. Flath has collected over the years. Some time ago, Mr. Flath decided to convert his barn into a “Party Barn” where groups can hold gatherings and concerts. The ground floor of the barn has been divided into many rooms that contain a bar, setting areas, and a game room. The up-stairs contains a theater where Mr. Flath holds musical concerts at various times of the year. Tickets for the concerts are sold at cost and the visitors are encouraged to bring their own food and drink. It is just an amazing place. One wonders after seeing it how many other unknown treasures like this must exist around our area.

Twenty-five of our classmates came with numerous additional guests. Most of us gathered outside the entrance of the barn relaxing in the generous shade catching up on what has happened to each other since our last get-together, reminiscing of old times in and especially out of OCHS, discussing our families and probably telling our many illnesses, aches and pains, and surgeries. Since most of us brought additional food and drink, everyone had a great time and had lots to eat and drink of whatever they chose.

We want to thank the following people that helped with cleaning before the party began : Ann and Ron Mathews and Ted and Carol Thomas Krawiec. The following helped with the cleanup at the end: Linda Carson Waugaman, Ann & Ron Mathews, Carol & John Mohnkern, Bill Passauer and Ted and Carol Thomas Krawiec. Mr. Flath told Carol that anytime our class wanted a get-together at his barn we were more than welcome as we left his place cleaner than we found it.

We also wish to thank Gary Barnes for his generous donation that provided the “stuff” that helped make the party the success that it was.

To our classmates that missed coming to our first “Class of ’63 Summer Celebration”. You truly missed a wonderful time. We intend to have another next year and hope to see even more of our class then, if not before at one of our class Mini Reunions.

Pause the mouse over an image to observe the caption. Click on any image to expand it to full size. 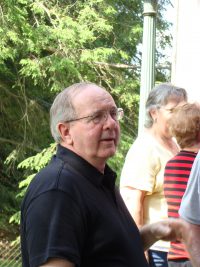